It’s been far too long since I last posted. What happened to my New Year’s resolve? It seems both time and motivation have vanished in the ether. I could make many excuses: I’ve bought and sold a house, I’ve partially packed a house, I have a very active toddler, Musicman has been away, etcetera, etcetera. As we all know, sometimes life gets in the way.

Way back in February, I celebrated my 38th birthday while Musicman was away. Because he had not thought to leave a gift at home for me, he went all out in March and bought me a Thermomix. (Okay, I’ll admit it, he may have had to listen to me talk about it for a year first …)

For the uninitiated, the Thermomix is a kitchen robot that can basically do everything except spoon the food into your gaping mouth. It is made by the Vorwerk company – designed in Germany and produced in France. It grinds, grates, blends, mixes, kneads, steams, sautés, weighs and cooks. You can even get it to clean itself by putting a drop of soap and some water in it.

Adapting and trying out new recipes has taken up some time but the learning curve is not too steep and my family has been enjoying the results tremendously. The things I like most about the Thermomix are its speed and efficiency. I have found that there is a lot less waste involved because I am less reliant on pre-packaged foods, and I am able to throw unpeeled vegetables in and the end product is still lovely. I am also able to whip up a decent meal in half an hour – from scratch.

I use the Thermomix at least once a day and find it especially wonderful for smoothies, steel cut oats, blended soups, hummus, guacamole, dips and rice. It would have been handy to have had when Ladybug was starting to eat solids. It is great for gardeners who are interested in preserves and canning. It is also an excellent tool for those delving into raw and vegan cooking.

Please note: I am certainly not being paid by Thermomix. I wish I were because the machine does not come cheap. I just drank the Kool-Aid and wanted to share my delight with others. 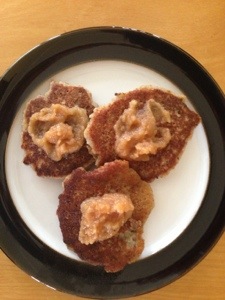 Error: Twitter did not respond. Please wait a few minutes and refresh this page.

Architecture is the learned game, correct and magnificent, of forms assembled in the light. Le Corbusier

Stay up to date on the latest Heart-Hugs news

Not a "how to be a great parent" blog

about women who do amazing things

Magazine of the Association for Safe Alternatives in Childbirth

Family, food and country living on a budget

My journey through the storm to see where the rainbow takes me.

Sweet Child of Mine

How I lost my son to Guns 'N Roses

In Pursuit of an Organized Life